We were of course thrilled that ‘Becoming Colleen’ was selected for competition at the 2020 ZineGoak Film Festival in Bilbao in Spain, and also for a special online screening at the Zinentiendo Film Festival in Zaragoza. Colleen would have been honoured to know that her story of courage, perseverance and love is finding resonance with Spanish audiences.

Not only were the 2 screenings of the film in Bilbao well-visited, but we were fortunate enough to be ranked in third place in the documentary category of the competition. Here is the message we received from Pedro Andrade, head of programming from the festival:

“The public really enjoyed ‘Becoming Colleen’ . There were 95 people in both screenings. ‘Becoming Colleen’ was voted 3rd highest in the documentary section of competition (8.18 out of 10). The winning film scored 8.32, so it was very tight. We also held a private screening with our Senior Jury, for those who couldn’t make it in the venue. They were especially interested in the story since, for most of them, sexual diversity is a “thing of the youth”. We’re so, so glad that you were selected for ‘Zinegoak’. This kind of story is what makes the festival useful and necessary.”

Following the film’s success in Bilbao, we were selected by Victor Solano from the Zinentiendo Film Festival in Zaragoza for this year’s festival. Due to the Covid-19 situation in Spain, the festival was moved online and the film was screened as a one-off viewing to a global audience in their homes over YouTube. Around 180 people tuned in and made many supportive comments in the chat window, pictured below. 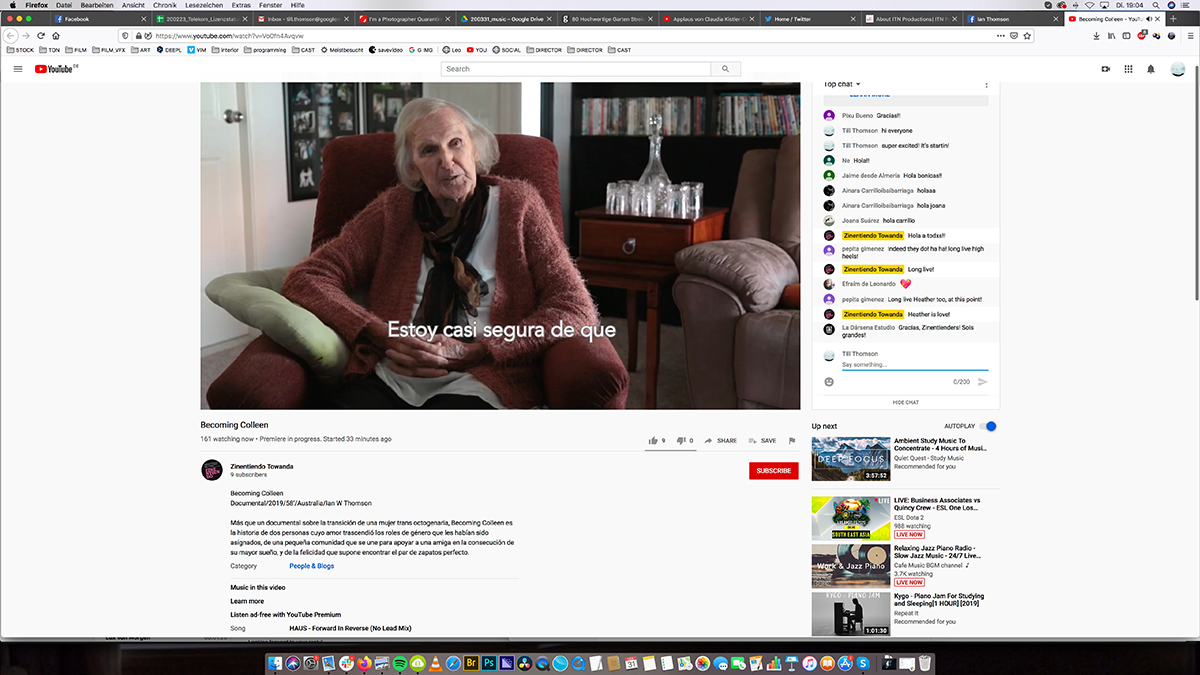 A shout out here goes to Manuel Moto for helping with the Spanish subtitles, and the many hours our editor Stephen Gamba put into embedding these into the edit.

Thank you so much to our Spanish audiences for your interest and support of Colleen and her story.

The screening in Zaragoza was also reported on by the local press:

Writer / Director
Be the first to write a review